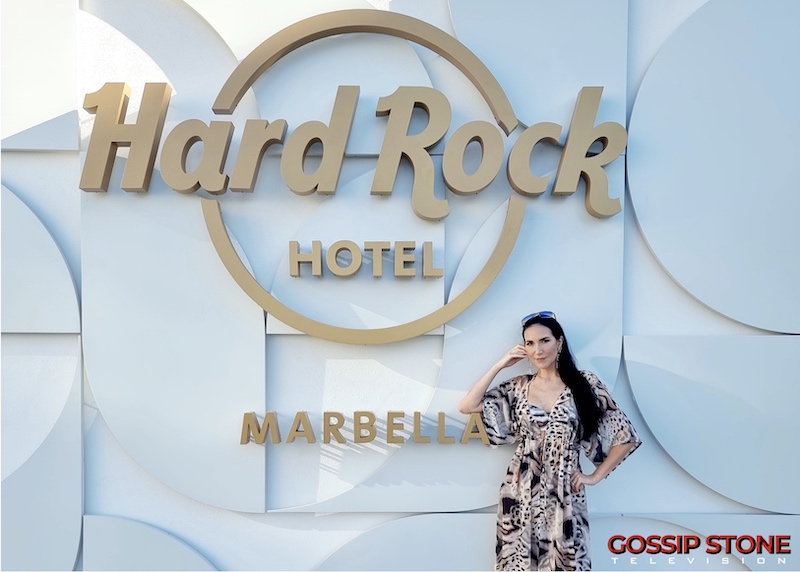 Debbie Wingham and her Gossip Stone TV show The Most Expensive say farewell to Marbella at the Hard Rock Hotel, home of Europe’s jet set elites.

Debbie Wingham is making the transition from the upscale Spanish town of Marbella to her new home in Dubai and doing it in style with the release of the first episode of her reality TV show The Most Expensive. The Queen of all things most expensive, Debbie and Gossip Stone TV are moving to a bigger, glitzier, more expensive scene!

With many of her most critically acclaimed works produced for Emirati families and showcased in Dubai, Debbie is no stranger to the Middle East, so this move has particular meaning for her and The Most Expensive Show. In addition to producing the send-off episode of her show in Marbella, a top Hollywood team is currently working on post-production with a premiere scheduled soon on Roku, Amazon Fire TV, and Apple TV, where Gossip Stone has launched its celebrity reality TV channel. A potential reach of 150M households marks a fitting venue for Debbie’s first TV show release.

This series was created by award-winning artist, producer, and serial entrepreneur Victoria Unikel, herself an iconic and individual artist. She is the head of Gossip Stone TV and of her very own and very unique media empire – VUGA Enterprises Media Group. The VUGA Media Group owns over 60 newspapers and magazines with millions of unique visitors monthly.

This episode features the Starlite Gala, Marbella’s hottest event of the season, as well as Debbie’s artistic process. A total of $70,000 was raised during this event for the Starlite Foundation, which strives to improve health and living conditions for families and children in need. Malaga-born A-list celebrity Antonio Banderas heads this charity foundation, and was joined by fellow celebrity Richard Gere and charity chairperson Sandra Garcia Sanjuan at this event. In the history of Starlite, Debbie’s original art pieces fetched the second-highest price of the night and broke the previous record for the most expensive art pieces. The collaboration was organized by Clarendon Fine Art, Wingham’s London gallery.

In addition to her many titles, Debbie was appointed ambassador for Puerto Banus in the summer of 2022, which led to one of her many creations. The Million Euro Mural is a 40ft by 7ft work of art that has become one of the most popular backdrops for social media. The artwork is dripping with diamonds and embodies pop culture and pure glamour – the definition of Debbie!

An elegant soiree was held at Hard Rock Hotel Marbella, which recently opened. The wonderful Hard Rock Hotel is located in Puerto Banus, right next door to the mural, and is the newest addition to the Hard Rock portfolio. Pets are welcome at the Hard Rock, a rarity in this region which has very few pet-friendly hotels. Wingham herself owns two chihuahuas, so she was delighted that they could join her.

Featuring a dress created by Nadja Rossato, one of Debbie’s favorite artists, and inspired by her own Million Dollar Mural, Debbie made quite a splash! Nadja Rossato, also known as Art Nadja, is known for her abstract paintings featuring the essences of powerful women, even some that were inspired by Wingham.

One of Marbella’s most luxurious ateliers and hot desk locations, Centro House, is also heavily featured in the first episode. This is one of the few hot desk properties in the whole region that offers atelier style live and work facilities that build cooperation between business owners and artistic entrepreneurs. As they expand their horizons and set their sights throughout Europe, they can network in a chill, yet upscale environment while networking.

For all this and more, make sure you tune in to The Most Expensive, Debbie Wingham’s new reality TV series that kicks off episode one of its first season in Marbella on Gossip Stone TV channel.

Using Debbie Wingham’s own private footage that has never been published, Victoria Unikel and Debbie Wingham are redefining the entertainment industry by giving a REAL account of what the other half lives like. Amidst the trials and tribulations of pursuing and creating her art, she shares the throngs of luxury innovators hot on her heels who try to steal her crown as Queen of the Most Expensive!